Where the buyers are: San Francisco's hottest neighborhoods 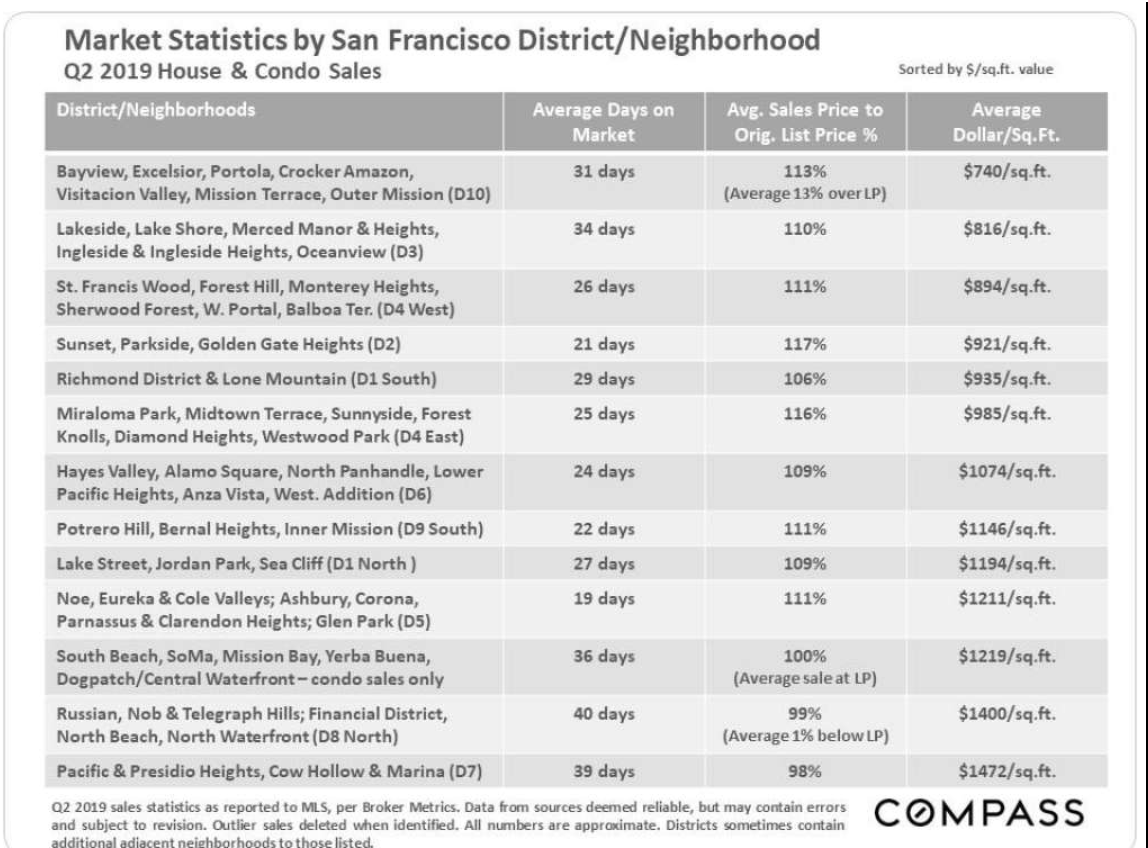 As with any real estate market, demand for one S.F. neighborhood over another fluctuates. Factors like seasonality, demographics, gentrification, commercial and urban development — to name a few — affect which areas of a city are most popular at any one period.

But we can make generalizations drawn from an entire quarter's worth of sales.

Price isn't everything in this kind of analysis. Patrick Carlisle, Chief Analyst at Compass Realty, told SFGate that he wouldn't associate "popularity" or market heat with dollar per square-foot value. That measures expensiveness"Typically, I'd associate market heat with overbidding and how fast homes were selling," said Carlisle.

The table included in the gallery above measures this "market heat" based on days on the market (DOM),price-to-sale ratio, and price per square-foot based on data pulled from the close of 2019's second quarter.

Based on these numbers, no one neighborhood enjoys all three: the lowest DOM, the highest sale-to-list ratio, and the highest price per square foot. However, there are some clearly winning districts (for a list of all neighborhoods within an SF district, see infographic in gallery above):

Even though summer is among San Francisco's slowest seasons, real estate is still selling — so where is it selling best?

Nina Hatvany, S.F.'s top residential agent in from 2008-15 and from 2017-18, agreed that "the most popular neighborhoods do tend to change with the season and depending on what population we're talking about."

So what if we're talking about right now? Summer is slow; still, said Natvany, "It is still an active time for investment properties (2-4 unit buildings) and smaller condominiums, particularly in District 7, which is comprised of the Marina, Cow Hollow, Pacific Heights, and Presidio Heights – as well as in Telegraph Hill, Russian Hill, Lower Pacific Heights, NOPA, Cole Valley, and Inner Richmond/Laurel Heights."

As for popular areas for single family homes, southern neighborhoods are in demand "because of the sun and proximity to commuting routes."

Bernal Heights is always very desirable, whatever the season, and the central neighborhoods around Dolores Park are attractive especially in the summer when the weather is nice: Noe Valley, Eureka Valley, Dolores Park, Mission. The single-family home market in the northern neighborhoods like Pacific Heights and Presidio Heights is not as active in the summer months – inventory is low because no one wants to put a bay view house on the market that is fully obstructed by fog, and a lot of families are away for the summer.

All of this, of course, could change soon. September, which is one of the city's biggest months for real estate, is just around the corner.